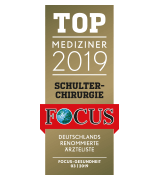 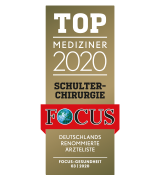 In addition to his training as a specialist in general surgery and trauma surgery, as well as orthopaedics, Prof. Habermeyer has specialised in the scientific and clinical aspects of the shoulder joint since 1982 and opened the first German Special Outpatient Clinic for Shoulder Surgery in 1984 at the Surgical University of Munich. In 1986, in addition to the usual open shoulder surgery, he expanded his surgical spectrum with both shoulder arthroscopy and shoulder prosthetics. In 1990, he published his first textbook on shoulder surgery, which in 2017, in the 5th edition with over 15,000 copies sold, is the standard textbook in German-speaking countries. After founding the German Shoulder Centre in 2012, Prof. Habermeyer has a broad surgical experience with over 20,000 shoulder surgery operations, including over 3,000 shoulder prostheses. 115 scientific publications on shoulder surgery and decades of conference activity pass on his clinical scientific experience.
Prof. Dr. med. Peter Habermeyer is one of the world’s leading specialists in the field of shoulder surgery.
As a former president of the European Association for Shoulder and Elbow Surgery (SECEC), he is regularly listed as one of the most renowned shoulder surgeons in Germany on the FOCUS list of doctors.
This is at the heart of his work: “Exact diagnostics, planned and safe surgical technique, reliable aftercare”.